This is paramount for Cosmos, and as many others have unfortunately said… we presumed this was mostly already close to completion, but apparently not.

However, this will stay a NO for me until some concrete Photon distribution numbers for ATOM holders are created, and these other stakeholders that seem to be complicating matters also clarified. As Zaki has said, there are alternatives in the works. And I also personally know of many missed opportunities with ETH services that were going to look to scale on Cosmos, but found out then that Ethermint didn’t even work, so one needs to take into accout that opportunity cost pushed onto us by what is likely these stakeholders being mentioned.

Am in favor of this proposal. Concise and to the point. It’s a long overdue project and its lack has certainly held back overall growth of the Cosmos ecosystem, so despite all the back and forth and ownership changes to the project, it’s better late than never. If now is the time because Fede and team can get behind this then so be it.

I do hope, however, that work can be completed before Q4. Otherwise full support.

Paradigm is in favor of the proposal.

EVM compatibility for the SDK will lower the barriers to entry for many developers and further Cosmos’s mission of bringing interoperability to every blockchain.

The Ethermint Chain is an interesting experiment in generalized (non-application-specific) Zones. We do not think that it would make sense for the Hub to offer contract deployment itself at this stage, so we like the proposal to align Etheremint Chain with ATOM holders through an airdrop and keep the consensus sets separate (at least until shared-security models are better explored).

One ask: can the proposers clarify their time commitments? Will they be full-time on Etheremint? If not, what else will they be working on, and how will they split their time?

I believe Frederico is fulltime here. His other initial contributing members are Esteban Miño (metamask) and Akash Khosla (anchorage) I believe are part time.

The funding will be in part to identify additional contributing members that are full time. As @fedekunze mentioned here: Proposal #44 - Advancing Ethermint: GTM and Engineering Plan for the Ethermint Chain - #14 by fedekunze

The expectation from Sommelier is that Fede would move over to working full time on Ethermint if this governance proposal passes and would primarily advise going forward.

Fede is finishing up a refactor of the Cosmos SDK side of the gravity bridge for us and then will be able to put his full resources into Ethermint.

I believe there is a plan to scale the team at Tharsis beyond the core contributors.

For instance, you could deeply integrate with Starkware’s Layer 2 service by resuing their Stark verifier EVM code.

I’ve seen some very very cool experiments with this from the Injective protocol team and the Ethermint proposal will dramatically lower the lift for this kind of innovation.

Building a Binance Smart Chain clone for ATOM holders might be where the market is right now but it is a road to nowhere.

In case of an airdrop for ATOM holder, it would be great to know the detail in advance :

This needs to be sorted out before we give yall any funding. Or atleast agree on what % is going to atom holders vs others this really shouldn’t be hard.

Have to agree. Such a large contribution would never come without an ownership stake if it came from a VC or other form of funding round.

I would say that any such proposal should come with a requirement to airdrop significant tokens to wallets that are currently staking $Atom.

Also In the long term, dropping community VC funds through votes like this may not be sustainable. It would be better to setup an $Atom based launch service where people can buy into Cosmos based ICOs using $Atom. That way people can just fund these projects directly for equity rather than through one off votes. It would also give more value to the $atom token.

For the entire history of Cosmos, Ethermint tokens have been perceived as valuable. This perceived value has cursed the project and allowed for value accrual to take place elsewhere.

There is a lot of tortured intellectual property history.
Ethermint may or may not be GPL’d software because of the ambiguities in go-ethereum’s LGPL license.

All in Bits filed for Trademark for Ethermint after losing all staff with expertise to complete the project in 2020.
https://uspto.report/TM/90076755

Ultimately I think the name Ethermint should be abandoned for this project. We need Fede to complete this software because he is literally the only person who can.

If All in Bits decides to use the software with the Ethermint trademark, they will decide on the token allocation.

Chainsafe feels like they should get some allocation of tokens for their somewhat marginal contributions to Ethermint.

Fede should provide ATOM holders with a distribution for any go to market work.

Even if we were to try and put some kind of protective provision into the governance proposal, they wouldn’t be enforceable in any meaningful way. The only real enforcement is Fede and his personal reputation and fair dealings with the ATOM holders.

I would certainly like to anchor this discussion as to what kind of minimium stake in the token Fede will do GTM for would ATOM holders feel is fair?

Above all else, I’d love to know the the rest of the distribution. If ATOM holders are the ones funding it via community pool, ATOM holders should end up getting the largest share of distributions, no?

Also chainsafe can feel however they like imo, if the contributions were marginal, and they failed to deliver any final product, why reward that? It is like the EVM creators feeling they want a share, since it uses the EVM.

Seems kinda rich then, to be paying 1 fulltime dev, and 2 part time devs, $2.2M USD at current valuation for 6-9 months of work (at that rate, we could pull more than a handful of ETH core devs at once), and likely much higher future valuation. Especially with no clarifiation on distribution, and ATOM holders receiving a minority share of distribution. If ATOM holders at least recieve the largest share of any stakeholders, then I’d find it more acceptable.

I’m also in favor of the proposal.

As Zaki said, Ethermint is in need of a dedicated team with the right leadership that can focus on the development and Federico is the best person to take this on.

The Injective team has been maintaining our own private fork of Stargate-compatible Ethermint which has been running on testnet with over 10,000 real users during our incentivized trading competition. We made a lot of improvements (mainly getting Ethermint working with Stargate since November 2020) and added support for a number of interesting experimental capabilities on Ethermint, namely

However, given stability and performance concerns, we decided to move our derivatives exchange architecture off of Ethermint to native Go code earlier this year. Our plan was to launch our mainnet without Ethermint support and then spend several months re-writing Ethermint properly from scratch, with performance and stability as the key factors in mind. Given that it seems this proposal will pass, we’re excited to contribute/collaborate with a dedicated team that is purpose-driven on making sure Ethermint is well-engineered and sees the light of day (which Chainsafe never really seemed to care about in all honesty).

To a bright future for Ethermint ahead!

I hope the ATOM community can partner more closely with Injective to make Injective a premier user of Ethermint.

tbh, that feels too low to me. There has been funding for this from ICF and now the community pool. Something like 50% airdrop to ATOM holders would feel more reasonable to me.

I can’t wait to see this come to fruition in Q4 of 2021. Great job on the well articulated proposal

Ultimately I think the name Ethermint should be abandoned for this project. We need Fede to complete this software because he is literally the only person who can.

Call it Ethmint and register all necessary legal provisions.

Where is the best place to follow this for progress updates? Telegram announcement channel, telegram group, or github repo? 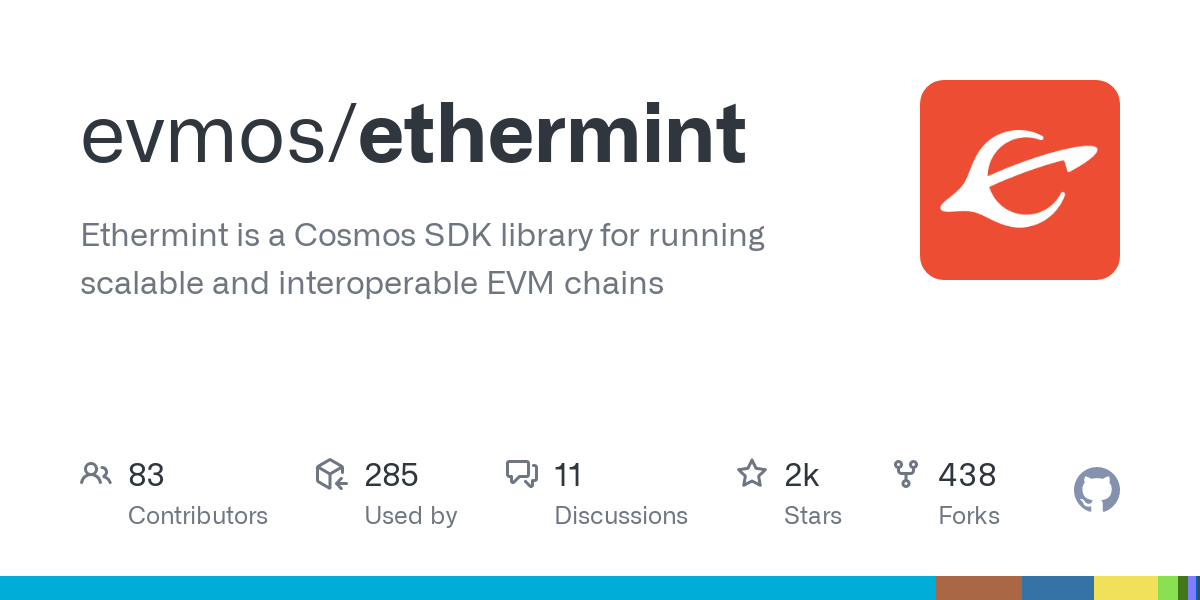 Ethermint is a scalable and interoperable Ethereum, built on Proof-of-Stake with fast-finality using the Cosmos SDK. - tharsis/ethermint

I’ve sent this message in the Discord too just for visibility.

I was just wondering, how easily will other chains in the Cosmos ecosystem be able to utilise Ethermint’s work in EVM-Compatibility?

Could other chains become EVM-Compatible / deploy Solidity smart contracts more easily on their own chain with the existence of Ethermint?