Is a PR from the MIB validator team that does precisely that.

It should be noted that this upgrade handler won’t change the minimum commission to 5% unless prop 76 passes.

Vote NO to reject the implementation of the upgrade handler / antehandler needed for minimum commissions.

Vote ABSTAIN to express no interest in the matter.

Vote NOWITHVETO to cause depositors to lose the deposit on this proposal and contribute to a failure threshold that is triggered when nwv hits 1/3rd.

I don’t have a strong opinion but I’d like to highlight that this introduces a potential attack where a cartel of large validators with economies of scale could theoretically raise the minimum commission to starve out smaller players.

I actually agree with the rationale and overall direction of this work, but I also think it’s important that there be some public consideration of adverse effects.

I keep finding this particular concern to be backwards.

Could you please describe how the attack that you think may exist, works?

I’ll model one for you:

I am a whaleish with no ethics. I care only of profit. Thus, I choose to make several 0% validators and then distribute NFTs to my delegators and sweep the floor of that nft collection constantly son that my delegators get some kind of fixed value for the NFT’s, from me. But I am also amassing VP. While amassing VP, I am also building short positions under 1000 farmed identities.

Once I reach 33% VP, I halt the chain, and I profit massively on my shorts. If no one figured out what I did, I’ll do this again and again, cackling like Mr. Burns on the simpsons.

The attack would be the top 7 validators collude to increase the minimum commission to 100% until delegators unbond and small players drop out and people move their delegations to the only remaining validators. Collusion could be very weak, just voting together without any other coordination. Monopoly then allows for price control. I think social consensus will likely kick in before this happens but it is possible.

Btw I completely agree 0% validators are a problem. They are largely marketing operations who are running operations as cheaply as possible.

We should take them seriously, because these “marketing operations” – definitely want to monetize at some point. So they can do a 0% / bribe attack, or they can eventually just raise commissions on their (usually unsuspecting) delegators.

The attack you described is non-viable: 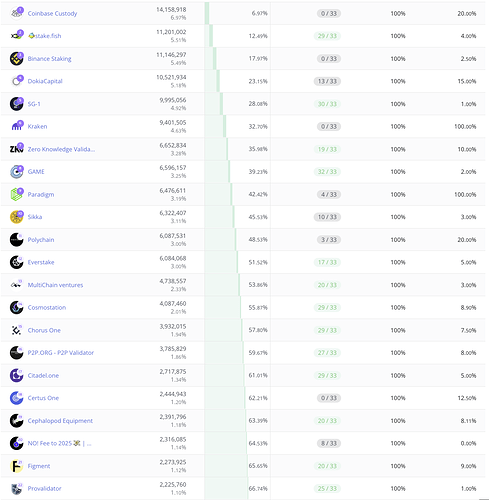 Top 7 is enough to halt the chain, this is true. But it would take 50% of all bonded stake to push through a gov prop to slam the minimum commission to 100%. If we look at the 50% set (66% picured above) we can see that there are many indies in there, whose delegators would override their votes.

Furthermore, we should account for delegator agency & the override. I think that it is much more likely that:

Notional is doing pretty good now, and our members write all kinds of code in cosmos.

Notional’s seed capital was 1x Uniswap airdrop, sold near the top value of that airdrop. Nothing else. No VC backing, certainly no support on the cosmos hub despite tons of code contributions. We got here because osmosis had minimum commissions and the team and community (both) saw our work as valuable and delegated to us. There was truly nothing more to it.

Notional is helped significantly by minimum commission policies on:

It’s important for the hub to be able to have minimum commissions, even if that commission isn’t 5%. Otherwise, the most likely outcome here is that the hub should be de-prioritized for validators.

This is an issue, since the hub’s operational complexity is going to go up a great deal with ics.

Race to the bottom

Also, if we’re going free markets, there’s a global fee module in the next version of the hub. I think we’d need to remove it. Fees should be zero because free markets.

I think this is worth backing up a step and asking a more theoretical question:

What might happen to the security of the network and the distribution of delegations throughout the validator set if minCommissionRate were to be a parameter on the Hub (i.e., One that can be changed by passing a param change proposal)?

I’d also like to step through various commission rate ideas.

Some other questions I pose to the class (without having any answers myself, lol)