[PROPOSAL] [DRAFT] Mandate the use of this forum for governance discussions

Intentionally as terse as possible:

3 days for suggestions on this matter, then Notionaldao will bring it to the chain for a vote, following the spirit and intent of this proposal, unless we get feedback that indicates that the mandated discussion on this forum should last for less than or greater than three days.

Vote NO to reject a three day mandatory discussion period on forum.cosmos.network.

Vote ABSTAIN to express no interest in the matter.

Vote NOWITHVETO to cause the depositors to lose their deposit on this proposal and contribute to a failure threshold that is triggered when nwv hits 1/3rd.

My only issue is the language with this that says it mandates a veto on anything that doesn’t follow this rule. As we saw on osmosis, it’s hard to get everyone to follow through with that. Things that aren’t enforceable on chain and have to be enforced socially through governance are hard to maintain consistently long term.

Can we get validators to follow through with a veto when it’s technically warranted from this prop?

Should this prop pass, would validators who didn’t agree to this prop be expected to vote for veto when this situation arises?

Is it better to just say it should be a NO?

Prior discusion should always happen, but the enforcement of not following this social norm is a hard question.

I prefer veto, but I think that at least form my perspective it’s likely best to get some more feedback from the community.

I’ve no interest in defining penalties for anyone-- not validators or delegators, for failing to vote in a certain manner, so not sure how this one gets enforced (but if the hub passes it, it is ratified as law, and is not merely lore on a forum that doesn’t even exist on chain or passed around twitter).

My personal motivation behind osmo 199 was to remove one type of lore that surrounded Osmosis governance.

rules that are used in making governance decisions should not be lore. they should be rules passed by governance.

in this context, consider:

we recently ran a survey of our delegators at Notional. The results of that survey indicate that following Thyborg’s advice in this matter would go against their wishes: notional delegators overwhelmingly choose notional because they want us to be opinionated.

One time I asked the community and our delegators if we should abstain on all props except those that we think are most important.

The feedback was abundantly clear: our deleagators wish for us to vote, and to do so in an opinionated manner.

I agree with the spirit of this proposal. I would ideally like to have it implemented as part of a larger “governance best practices” framework, which would include things like the use of NWV, conflict of interests etc.

I agree with the formalization on-chain of the governance procedure.

Even if this procedure was already largely formalized by adoption, it is clear due to the latest proposal, that add formalization on-chain is needed.

I don’t think it is necessary to add that the proposal that doesn’t follow this iter will be punished with NWV.

Because Prop75 is about to pass and Prop 75 says that No with Veto is applied also to ''proposals that violates or encourages violation of the rules of engagement as currently set out by Cosmos Hub governance.”

So Prop75 already says that a proposal that violet the rules of engagement set by the Cosmos Hub will advise the use of NWV.

If Prop75 will pass, as it seems. This proposal simply has to set on-chain this new rule of engagement regarding the procedure of submitting a proposal on the Cosmos Hub.

Maybe a reference to Prop75 ( in case it is approved) can be added in this proposal, to warn especially newcomers of the consequences of not following the right procedure to the submission of the proposal.

I too would like to see some discussion of the conflicts of interest between the ICF and informal systems.

So you are using a space reserved for the community to discuss a new proposal to shame me? That’s really unprofessional from a validator.

And you reached your lowest point today, I don’t think that engaging with you at this point could add any value.

I’m personally feel bad for all the community members that will enter this forum and see such behavior, it really shows immaturity.

And I kindly invite you to use a different space for this kind of accusations to respect not only me, but the Cosmos community that is coming here to contribute to a proposal and have a constructive discussion.

If we have to pute mandates on governance, than I also think that votes choices of all wallets and validators should be private and invisible to the public so no one is being shamed on social media for thier votes.

As a validator I think that my votes should be public so delegators can choose well based on my vote history.

At notional, we will never give in to claims of “conflict of interest” because the override function is really one of the cosmos SDK most elegant. 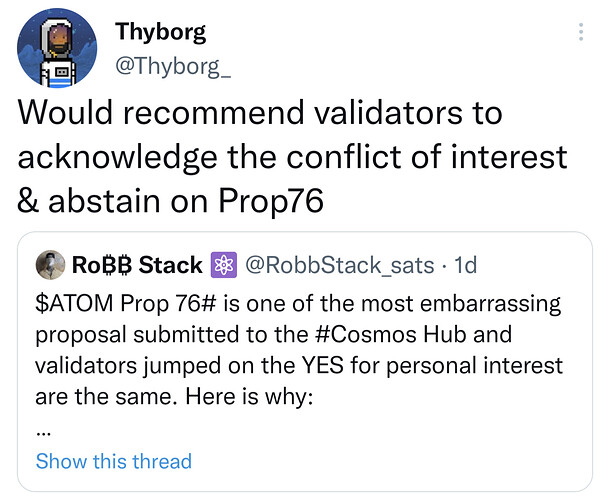 Some don’t understand this, but kitteh does.

Btw if you don’t like a kitteh vote, tell her. Just don’t cite blatantly false sources when you do that

And please, please don’t try to stop her from voting. Our delegators have chosen us to vote for them and that’s our job.

Was thinking about putting up a proposal to reducing the vote duration to 1 week AND asking that proposals go up on the forum for a week. However, I’d support this proposal as a place to start, so don’t block on me.

I’d say there is one exception here, which would be an emergency upgrade in the event of a significant bug. In this case a post should go up on the forum at the same time as the proposal is made.

@Thyborg - I think it’s better to accumulate small proposals that collectively form a larger governance ‘rules of engagement’ (as mentioned in Prop 75) or constitution and this is a great start. The more dense and complicated a proposal gets, the more likely we’ll get bogged down in endless discussions over the details.

This one is clear and straight to the point: 3 days’ discussion on the forum is required. It’s ‘unenforceable’ just like all signaling proposals, but the enforcement is supposed to come from the people signaling their agreement and personally committing to upholding it and introducing consequences for those who don’t (via a burned deposit).

The most I’d ask be added is an encouragement to use the forum tags, since they link to a telegram bot that will alert folks when a proposal hits ‘last-call’ and is nearly ready to go on-chain.

I agree with @hxrts though - would prefer at least a week of discussion. 3 days is very short, especially noting personally that this post went up on a Saturday in my timezone and so the three days was mostly weekend!

Hey @lexa I just want to let you know I was thinking exactly the same thing about the discussion time.

How about I put in my calendar, something for this governance proposal for Wednesday of the coming week?

Maybe I try to hop into the Cosmos hub fireside chat on Wednesday just sort of explain the intent of this and I think it’s exactly that I totally agree that it should be smaller pieces we could even arrange them into something that can be read as a package.

Thanks to @hxrts for advice on disconnected commentary in these posts. I’ve removed some content here, to ensure that it stays on topic.

To @thyborg I wish to once again highlight that proposal 76 does not pose a conflict of interest for validators. Our delegators can always override if they disagree with our votes, and our delegators have delegated their votepower to us.

I agree with the general motive of this proposal. I do like to see community discussion prior to a proposal. I do worry about requesting a “no with veto” vote for proposals the are brought forward without the 3 day discussion. Can anyone think of props that may be more urgent and cannot wait for 3 days?

Anything dealing with emergency chain upkeep / software should be exempt, because those should be put through quickly.

I would suggest maybe adding something about that to the proposal.

Fireside chat would be great! And agree with @MattAlexander about explicitly calling out the possibility of urgent upkeep. Worth putting it in writing even though it’s common sense.

Putting this one up now.

Some people had contacted me and said that it wasn’t enforceable bit after thinking about it I realized that the enforcement is actually in the hands of the community exactly where it should be.

Was thinking about putting up a proposal to reducing the vote duration to 1 week AND asking that proposals go up on the forum for a week. However, I’d support this proposal as a place to start, so don’t block on me.

hey sam, the original text had something in it for emergencies, but I have made it clearer in the new text.

I would suggest maybe adding something about that to the proposal.

figuring to go live in the next couple of hours. I vacillated on this one, but it is really self-enforcing.