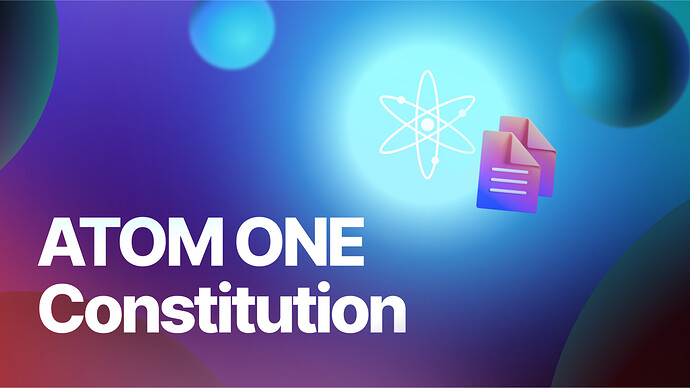 Cosmos has grown into the largest interoperable blockchain ecosystem today. Fueled by passionate contributors and an engaged community, the ever-expanding Internet of Blockchains is one of the most active networks with highly advanced notions of Proof of Stake and governance. Born out of a desire to create a free world in which transactions could be borderless, innovation permissionless, and economic security ensured, a vast network of sovereign distributed communities can now trustlessly interact and transfer value.

The vision of the Cosmos Network laid out in 2016 has come to fruition and the needs of the interchain are evolving. This is entirely logical. Cosmos is a dynamic and fluid network characterized by continued innovation and iteration. What applied yesterday may need to be adapted today to take into account evolving technology, society, and ideas. Laws are not set in stone. But basic principle guidelines are needed to shape the identity of a community.

Laws are designed to regulate our behavior in accordance with societal norms. Laws are meant to protect our rights and set the standard for what is acceptable (and what is not) at the time they are written. Since the first documented law in the United States was passed by Congress in 1789, Americans have been voting on, passing, repealing, and amending legislation to reflect the ever-changing needs of society. The world would be a darker place today without the abolishment of slavery, the right to vote, or the end of segregation; all highlighting why laws must evolve over time.

Values, on the other hand, should be chiseled into the mountainside like the faces of presidents — or coded immutably into the blockchain. Values are what define us and form the basis for our thoughts, actions, and words. They give us a clear sense of purpose and direction and help us grow as humans and collective societies. When we share common values and ensure that we stand by them no matter the cost, realizing our vision becomes inevitable. We build the future the way we want it to be.

In our relentlessly frenetic media-manipulated world, our values are under constant threat. It’s almost impossible to separate signal from noise, fact from fiction, or right from wrong. That’s why now, more than ever, we, the people of Cosmos, need to double down on our core values.

The Core Values of Cosmos

The Cosmos Hub was created with a guiding vision that enabled decentralization and a blossoming ecosystem. Our core values of transparency, accountability, security, simplicity, and decentralization are uncompromisable. They have been fundamental to the success of the IBC economy — and the success of Cosmos as a whole. With the completion of IBC and at this inflection point for Cosmos, we find ourselves entering a new era. We must proceed with caution to preserve our progress so far and ensure alignment with our values.

Many drastic and major revisions to the Cosmos Hub have been proposed recently. These proposals have many merits that deserve to be explored and debated (calmly and cognizant of our values). We need more public conversations, transparent decision-making, and accountable practices for developing and funding the Hub that ensure its security and decentralization. And we need a Constitution that we can rally around and hold as a universal source of truth and reference point to illuminate our path.

The US Constitution was written to enshrine a commitment to the core values of the United States of America: liberty, equality, and democracy. Centuries old, the Constitution continues to serve as a reminder of what embodies the citizens of this country. Of course, we are all aware of the many failings of our system today; that’s what motivates us to work on advancing web3 for a freer and more accountable world.

We have an opportunity now like never before to establish a functioning accountable democracy — and we must not get this wrong. Cosmonauts need to pull together to build solutions that can last for centuries like the US Constitution, serving as a reference point for others to follow. Minimalism in our design is crucial, along with an understanding that adding excessive functionality to the Hub will increase attack vectors and detract from its central role of providing security for the ecosystem.

If we don’t act now; if we fail to speak up, we risk a massive flight of cosmonauts to other ecosystems that better align with their values — and we risk jeopardizing our dream. Rather than developing the solution, we allow Cosmos to become part of the problem.

“I was attracted to $ATOM for the potential for decentralisation, the empowerment of communities, the quasi-libertarian free market spirit, ethos, minimalism & predictability of @cosmoshub. Soon exiting because it no longer aligns with my worldview. Mine, not necessarily yours,” wrote Johnnie B on Twitter. His sentiments are felt far and wide across the community.

So, what can you do? How can you make your voice heard at this pivotal time? There is an ongoing proposal in the works that addresses all these points. ATOM ONE first draft is being proposed by Cosmos founder Jae Kwon as the Cosmos Constitution for the Hub. It aims to be a collective collaboration between all Cosmos community contributors.
Each and every one of you can contribute your thoughts and ideas to help shape its final form.

A signaling governance proposal #83 was put forward on Monday, October 31, to gather the community’s sentiment and alignment with the idea of building a Constitution for the Hub. If passed, this will send a strong signal that the community is in favor of adopting a Constitution, in the final form that will be designed together with the community, and any future proposals must be shaped according to its guidelines.
The voting period lasts until November 14th.

With your help, a final proposal of the Constitution will be put forward once the final draft will be ready to allow sufficient time to gather the community’s feedback and suggestions. Get involved. Leave your comments and suggestions on the Constitution’s draft here or directly on GitHub and help safeguard the future we all want to create.

Would it be alright to make a PR on this? Perhaps YT video/audio podcast ep reading this aloud? After the community has come to a general consensus of course. Throwing idea to help contribute advocating (a more appropriate way) and bring awareness, for all of us here in the Cosmos.

I am very much in favor of a constitution, since it provides clarity.
And a document which we can discuss over, instead of shooting from the hip in Twitter messages over half-documented governance proposals.

I would like to propose to get the ATOM One, Two, Zero, or whatever marking out though. A constitution will be helpful, whatever choice we will make.